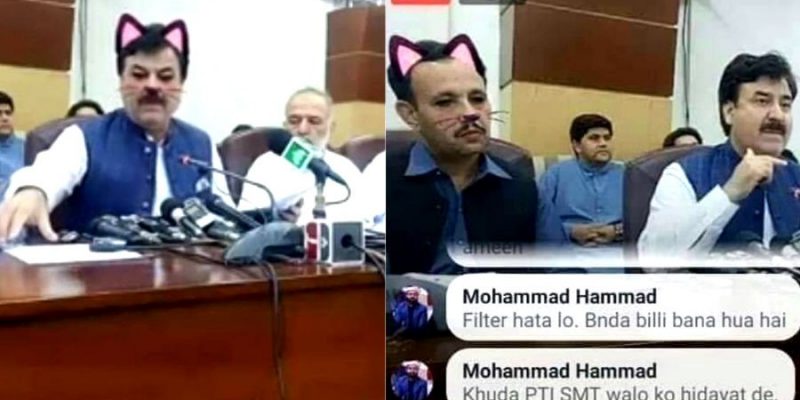 Political press conferences could be boring but during a live press conference last week a Pakistani politician, who is an appointed regional minister Shaukat Yousafzai streamed on Facebook with a cat filter on. A lot of things can go wrong for the government officials who address publicly. The words could bring embarrassment if a slight lingual error occurs in a speech. Unfortunately, this event has caught attention internationally.

Yousafzai is a regional minister from northwest Pakistan, he was speaking to reporters last Friday about local issues. A volunteer from his party Tehreek-e-Insaaf streamed the event live on Facebook so the users and participants could follow along. During the event, the volunteer accidentally activated the cat filter on Facebook Live. As Mr. Yousafzai keeps on addressing people the comical filter appears with superimposed digital pink ears, whiskers, and rosy cheeks.

Mr. Yousafzai told the AFP news agency that he was not the only one who was hit by the cat filter but there are two other officials sitting beside him who hit with this cat filter.

Live viewers noticed this mishap and tried to alert the official office in the comments. Despite being warned by the users the stream continued for several minutes with the filter on, which also added the effect to two officials beside Pakistani politician Yousafzai. The PTI party got it deleted shortly after the conference was wrapped.

On its official Twitter account, Pakistan Tehreek-e-insaf party has apologized and admitted that the snafu was caused by “human error” and that action has been taken to prevent future incidents. They also said that is a necessary step would be taken to avoid such situations in the future.

They further said that the social media team is to be the pioneer of the digital world. PTI party is proud to bring Pakistani politics, issues, and events on social media so that the public would remain aware of the current happenings. Almost each of the party member has been using Twitter to express their views and to better connect with youth. That’s the reason PTI become the high ranked party in terms of its updates and campaigns on Social media.

The party had promised that no such incidents will take place again, also, it does not looks like the people have minded the filter mistake. Nonetheless, it definitely becomes a reason for smile for so many people out there who were watching the live conference. Yet, this is a hysterical mistake of the century, who knows maybe Yousafzai party has come up with this idea to attract young people to politics; use filters when streaming events live on Facebook.