After the Cambridge analytica, Facebook policies have changed to avoid such problematic trials in future, that’s why the social media giant now decided to take up strict actions on the post which endanger people financially not just physically, mislead them through false claims, or to trick them to earn money is also strictly banned from now on.

Yesterday, Facebook talked about the policies which ensure more transparency in order to establish a set of rules and regulations to secure users rights in future. This move was taken when the cloudy rules led to a backlash and then removed four pages linked with Infowars conspiracy theorist Alex Jones. After that, the company clarifies it is not government controlled and, therefore, does not have to necessarily follow first amendment rules.

We do not, for example, allow content that could physically or financially endanger people, that intimidates people through hateful language, or that aims to profit by tricking people using Facebook,”  published by VP of policy Richard Allen.

In a recent statement, Facebook said that it will not only ban posts which fuel the violence and hate speech but also restricts post that promotes anti-social elements to gain profit at the expense of someone’s life. This is the first time Facebook has taken these measures and made changes regarding financial attacks. The company further clarified they cannot block a post just on a basis of doubt, therefore, rather blocking the content FB demotes the content which later checked by the newsfeed fact checkers.

Allen said, “Rather than blocking content for being untrue, we demote posts in the News Feed when rated false by fact-checkers and also point people to accurate articles on the same subject.”

Facebook is now very active to provide protection to its users against spammers, scammers, and fake businesses. They are also planning to install machine learning technology which will find out the fake news, the algorithm will then demote pages who also sponsored hoaxes in different countries. 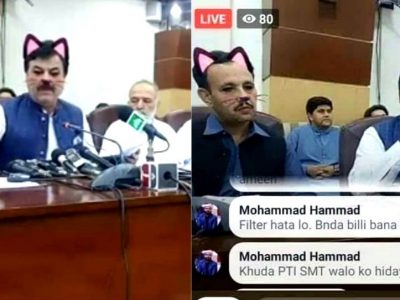 Political press conferences could be boring but during a live press conference last week a Pakistani politician, who is an appointed regional minister ...
By Jazib AliJune 25, 2019