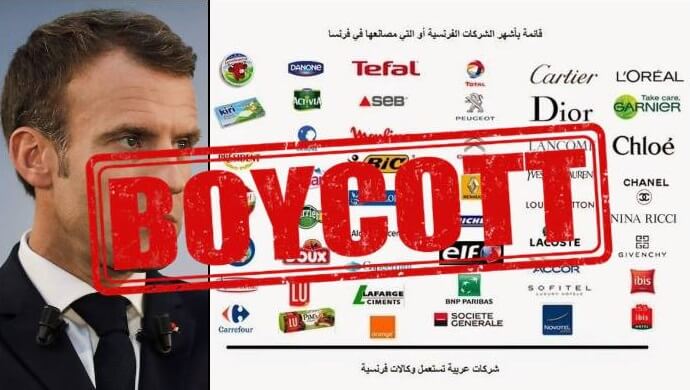 The call to boycott French products is growing in the Muslim world as a reaction to President Emmanuel Macron’s recent controversial statement about Islam.

He made his statement after a teacher was beheaded earlier this month for showing the caricatures in his class depicting the Prophet Muhammad(PBUH). In the official memorial of French teacher Samuel Paty, Macron said France “will not give up our cartoons”.

Trending on Twitter, the boycott campaign urges Muslims around the world to boycott French products in response to the French President’s anti-Islamic statement and continuous support of blasphemous actions in the name of “freedom of speech”.

Muslim countries are condemning the blasphemous statements of the French President. Qatar and Kuwait have already removed french products and the boycott seems to extend to other Muslim countries including Pakistan.

Prime Minister of Pakistan, Imran Khan criticized the French President for provoking Muslims instead of putting a healing touch. In a recent tweet, he stated;

It is unfortunate that he has chosen to encourage Islamophobia by attacking Islam rather than the terrorists who carry out violence, be it Muslims, White Supremacists or Nazi ideologists. Sadly, President Macron has chosen to deliberately provoke Muslims, incl his own citizens,

PM Imran Khan also sent a letter to the founder of Facebook Mark Zuckerberg demanding a ban on Islamophobic content.

Making an anti-Islamic and blasphemous statement by the French President may cause serious political and economic losses to France as the boycott is gathering pace with every passing hour. People are sharing pictures of french products encouraging Muslims around the globe to avoid buying these products.