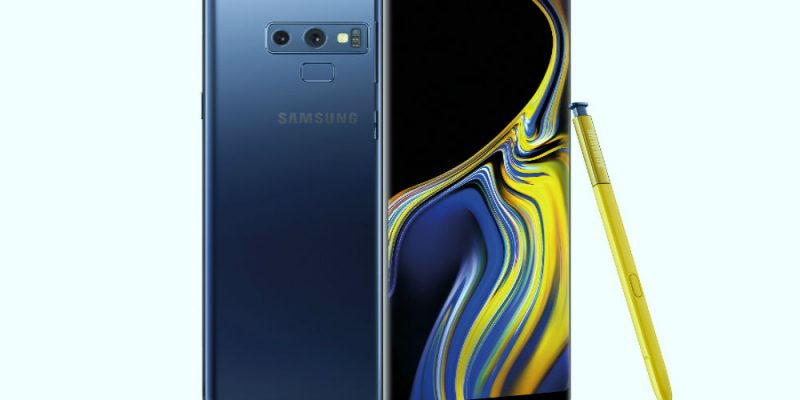 The new Samsung Galaxy Note 9 has been formalized, a high-end smartphone that has the distinction of offering S Pen. The Galaxy Note9 is positioned as the big brother of the Galaxy S9 and Galaxy S9+.

The Samsung Galaxy Note 9 offers a curved screen Infinity Display with a diagonal of 6.4 inches. There is a Super AMOLED panel in 18.5: 9 formats, compatible Mobile HDR Premium, with a definition HD Quad + 2960 × 1440 pixels (a density of 516ppp).

Like the Galaxy S9, you will not find any front buttons but a real home button, an invisible button is placed under the screen. It is a pressure sensor that will allow you to activate it or not. The fingerprint reader is on the back, below the cameras which simplifies its access to the blind.

You will also find the Galaxy Note9 with a Qualcomm Snapdragon 845 processor. It also has an internal memory of 128 GB with 6 GB of RAM or 512 GB with 8 GB of RAM. This memory is expandable thanks to a Micro-SD port that supports the new cards of 512 GB Samsung, which means that you can have a smartphone with 1 TB of memory.

It is also Gigabit Wi-Fi Ready and offers Bluetooth 5.0, WiFi ac and stereo speakers signed AKG. There is of course an iris sensor for face recognition. The phone is entitled to a 4000mAh battery. There is of course the wireless and fast charging, all in dimensions of 161.9 × 76.4 × 8.8 mm and a weight of 201 grams.

The Galaxy Note 9 is slightly larger and heavier than the Galaxy Note8. The Galaxy Note9 will be launched with Android 8.1 Oreo. In the capturing section, the sensors on the back are equipped with DRAM, which allows slow-motion videos to be shot up to 240fps in 1080p and 960fps in 720p. It includes the “Automatic Motion Detect” feature, appeared with the Galaxy S9 and simplifies capture at the right time.

The Dual Pixel autofocus is super fast with the “Dual Aperture” technology allows the main camera to have two apertures: F / 2.4 when the brightness is greater than 100 lux and F / 1.5 when it is lower. It also offers a second camera with a phone lens with autofocus and an F / 2.4 aperture. All sensors are 12 megapixel sensors and all lenses represent optical stabilization. On the front a selfie camera of 8 megapixels, an opening of F / 1.7, the Smart Autofocus and recognition of faces is present.

Of course, the Galaxy Note range lies in the presence of S Pen that fits in the shell of the smartphone by the bottom edge. The S Pen supports up to 4096 pressure levels. In addition, the S Pen is Bluetooth with autonomy of 30 minutes. The phone in its Cobalt Blue version, offers a yellow S Pen.