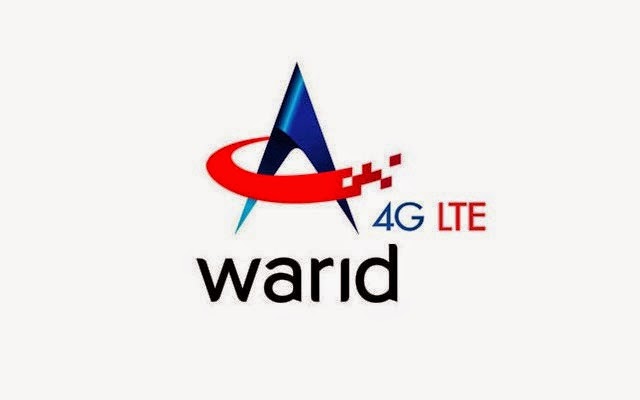 With a little delay in launch date but finally done by Warid during GITEX Technology Week 2014, announced that they are deploying 4G LTE services in Pakistan. They have chosen sole supplier of 4G LTE services, Ericsson Company, for its deployment across Pakistan.

Warid have confirmed officially that this 4G LTE service is under testing phase only internally but will also be available to all customers for their testing soon. Those customers who have 4G enabled handsets can test the 4G LTE service of Warid soon. They have already started to deliver 4G LTE supported Sims to their Customers.

Warid is now among those few networks in world which have directly shifted from 2G services to 4G LTE services and for Pakistan is the sole one. With this launch, Warid is hopeful that they will regain the trust of their customers which previously was lost.
Warid was the only network that has not bid for 3G or 4G LTE services license in Pakistan but as they have their own plans (which are revealed now) to launch 4G LTE services so they are now taking it seriously.
Commenting on announcement, Mr. Muneer Farooqui said:

“Warid is gearing up for the 4G LTE launch with the best available network solutions and Ericsson has been committed to provide us with the state-of-art technologies and services. Our strong partnership and working relationship with Ericsson has given us complete trust in their technology and execution, making them the preferred partner for this landmark project as well.”

Further stated, Pakistan is in middle of internet revolution and gadgets are being highly uptaken by community due to increasing interest of users across country. Connectivity through internet have tremendously increased during past years so Warid does have a clear vision to provide its users with this facility. Warid is hoping to deliver optimum customer services to its customers anywhere in Pakistan. One of screenshot of tests conducted by Warid in Lahore is given below shows that Warid have a highly capable of 4G Lte deployment as the Download speed is 51.01 Mb/s which is good for them in testing phase.

Jazz has started super 4G bus tour across nationwide in promotion of their enormous 4G services. For this purpose four Jazz buses begun ...
By Mehak TariqMarch 29, 2018

Telenor has officially introduced 4G MBB packages starting from Rs 1500 and goes up to Rs 6000 inclusive of all Govt taxes. Following ...
By Jazib AliDecember 26, 2016

Mobilink is the largest mobile network operator with about 38 million subscribers base in Pakistan. After launch of 3G services Telenor was the fastest network to extend ...
By Jazib AliSeptember 13, 2015

Ufone is third mobile operator to enter the Pakistani market with about 24 million customers across Pakistan. Unfortunately they are slowest to roll ...
By Jazib AliJanuary 31, 2015